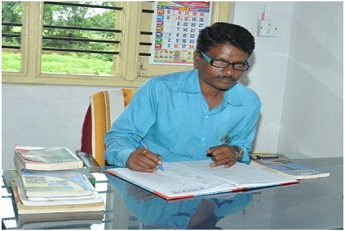 The Hindi Department was started in the year 1979. Along with the inception the college. At the same time it established and flourished so well with Back Minor and Major subject. Shri.N.B.Patil was joined in the Department a lecturer and he is retired as a principal at 2012.In the year 2009 Dr.A.E.Gaykawad joined the Department as a lecturer. Presently he is a HOD and prof.R.R.Rathod has joined in the year 2014 as Guest faculty. It shall be the duty of the Union to promote the spread of the Hindi language, to develop it so that it may serve as a medium of expression for all the elements of the composite culture of India and to secure its enrichment by assimilating without interfering with its genius, the forms, style and expressions used in Hindustani and in the other languages of India specified in the Eighth Schedule, and by drawing, wherever necessary or desirable, for its vocabulary, primarily on Sanskrit and secondarily on other languages. 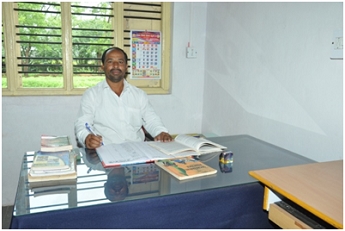 Hindi is considered to be a direct descendant of Sanskrit, through Sauraseni Prakrit and Śauraseni Apabhraṃśa. It has been influenced by Dravidian languages, Turkic languages, Persian, Arabic, Portuguese and English. Hindi emerged as Apabhramsha (Sanskrit:अपभ्रंश; Corruption or corrupted speech), a degenerated form of Prakrit, in the 7th century A.D. By the 10th century A.D., it became stable. The dialect of Hindustani on which Standard Hindi is based is Khariboli, the vernacular of Delhi and the surrounding western Uttar Pradesh and southern Uttarakhand. Urdu, literally meaning, "the language of the camp", a dialect of Hindustani, acquired official linguistic prestige in the later Mughal period (1800s). In the late 19th century, the movement standardising a written language from Khariboli, for the Indian masses in North India, started to standardise Hindi as a separate language from Urdu, which was learnt by the Mughal elite. In 1881, Bihar accepted Hindi as its sole official language, replacing Urdu, and thus became the first state of India to adopt Hindi.