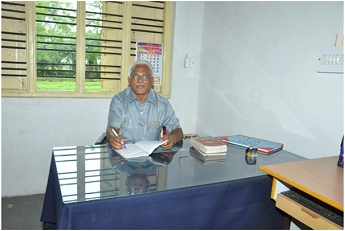 The Kannada department was started in the year 1979. Along with the inception of the college. At the same time it established & flourished so well with Basic , Minor & Major subjects. In the year 1982 Minor folk-literature added a new flavor to the department. Shri.S.R.Loni was joined in the department as a lecturer. In the year 1980 Shri.S.K.Koppa joined the department. In 1982 senior Kannada Prof.B.B.Nadagouda of Bijapur college joined as a principal. His appointment enriched Kannada Department in its strength and substance. Shri. A.C.Mangalore and Shri A.S.Ganiger joined the department as third and fourth person in 1983 and 1992 respectively.Now Sri.S.R.Loni has expired Dr.S.K.Koppa and Prof.A.C.Mangalore are retired from the service. Presently prof.A.S.Ganiger is HOD and Prof R.K.Badiger has joined in the year 2014 as guest faculty. 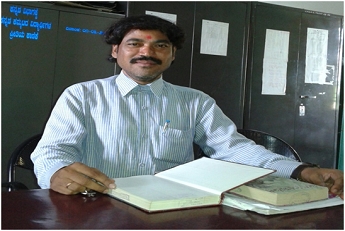 Kannada is a Southern Dravidian language, and according to Dravidian scholar Sanford B. Steever, its history can be conventionally divided into three periods; Old Kannada (Halegannada) from 450–1200 A.D., Middle Kannada (Nadugannada) from 1200–1700 A.D., and Modern Kannada from 1700 to the present. Kannada is influenced to an appreciable extent by Sanskrit. Influences of other languages such as Prakrit and Pali can also be found in Kannada language. The scholar Iravatham Mahadevan indicated that Kannada was already a language of rich oral tradition earlier than 3rd century B.C., and based on the native Kannada words found in Prakrit and Tamil inscriptions of that period, Kannada must have been spoken by a widespread and stable population. The scholar K. V. Narayana claims that many tribal languages which are now designated as Kannada dialects could be nearer to the earlier form of the language with lesser influence from other languages. Kannada is one of the oldest living languages in the world.